JOKE THEORY (PART 2 of 2)
Harrison Greenbaum shows how he actually applies all his theories from part 1 of JOKE THEORY to his stand-up writing and performance. We go step-by-step through some of his best material, laughing and geeking out the whole way. It’s funny and fast-paced, and it builds on part 1.

In part 2, you’ll hear:
– The “secret algorithm of comedy”
– How to make a 2nd level joke a 3rd level joke
– How much truth to use in a bit / Research
– Use of plosives, why it works (idea fencing theory)
– Audience processing speed
– Rule of 3 woven into multiple parts of different elements of a bit
– Testing for resonance
– When and what to transcribe
– Fleshing out the angles
– Subjective vs. Objective realities
– Bit saturation (how many tags can a bit hold)
– How to keep an old bit alive for the performer
– What to hold constant as you test parts of your material
Also:
– Dealing with oppositional audiences
– Building trust with a crowd who doesn’t share your point of view
– Working clean 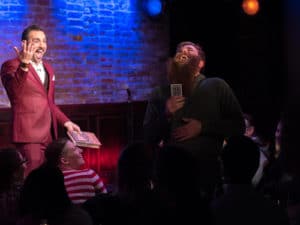 ABOUT THE GUEST COMIC
Harrison Greenbaum been featured on America’s Got Talent, Last Comic Standing, AXS.TV’s Gotham Comedy Live, along with many other TV appearances. He’s won numerous awards for his comedy, including the Andy Kaufman Award for creativity and originality in comedy, the Shorty Award from Comedy Central, and Best Emerging Comic from the New York Comedy Festival. He’s got writing credits up the wazoo, performs in over 600 shows a year, and on top of all that, Harrison also saws doves in half and conjures flocks of women into the air as magic. Or something like that.

And a huge thanks to to our guest, Harrison Greenbaum! What a mensch.

CHECK OUT HIS MAGIC: http://www.harrisonmagic.com/

And Salt N’ Peppa, you complete my palate.