JOKE THEORY (PART 1)
The magically funny, wildly prolific, and hyper-analytical Comedy Cellar comic, Harrison Greenbaum, delivers a masterclass on JOKE THEORY! He’s been doing comedy since he was 18 years old, and he wrote his Harvard psych thesis on stand-up! Harrison enthusiastically shares his favorite joke theories he’s learned from others; and he generously outlines his own original theories. These are, truly, some of the best and most actionable approaches to jokes we’ve ever heard. Want to know why your joke doesn’t work? Try his Three C’s. What makes a joke worth telling AND laugh-inducing? Make sure it has both the Twist AND the Point. He talks about his dead-simple method of slimming down premises (which is forehead-smackingly brilliant), and he shares how he’s always thinking in terms “audience processing time” to trim the fat off his jokes. And there’s a lot more! His scientific approach to jokes gave us gem after gem of comedy craft. In this episode, part 1, we cover the theories. In part 2, we see them applied in his material. 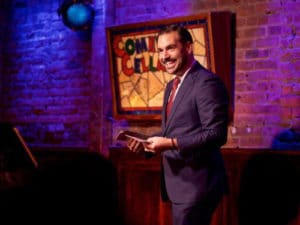 ABOUT THE GUEST COMIC
Harrison Greenbaum been featured on America’s Got Talent, Last Comic Standing, AXS.TV’s Gotham Comedy Live, along with many other TV appearances. He’s won numerous awards for his comedy, including the Andy Kaufman Award for creativity and originality in comedy, the Shorty Award from Comedy Central, and Best Emerging Comic from the New York Comedy Festival. He’s got writing credits up the wazoo, performs in over 600 shows a year, and on top of all that, Harrison also saws doves in half and conjures flocks of women into the air as magic. Or something like that.

And a huge thanks to to our guest, Harrison Greenbaum! What a mensch.

CHECK OUT HIS MAGIC: http://www.harrisonmagic.com/

And, forever and ever, you spice up our lives, Salt N’ Peppa.