Episode 057 GAY SHIT - Jay Jurden: "Perform for the audience you have"

GAY SHIT
In this episode, the “illustrious” Jay Jurden joined us to gayly talk about gay humor and also humor about gayness. Our goal was to examine the relationship between stand-up comedy, homosexuality, and homophobia, tracing a path from Richard Pryor to the present. We cover how approaches to jokes about male homosexuality have shifted over the decades as American values have changed. We REALLY enjoyed listening to how crowds received this kind of material from one decade to the next. We asked why is homophobia funny, why do the tensions between male masculinity and femininity evoke such laughter, and why aren’t there world famous gay comics? Jay talked about performing material (gay or otherwise) as a queer-identified comic, and how he snuck that stuff right onto The Tonight Show! And we really unpacked the word, “faggot,” so if that’s a trigger for you, we encourage you to ignore any and all context of the discussion so you can focus only on your outrage at hearing that word, because this show has a high FPM (faggots per minute) rating. It’s a 2 hour show, so we covered a lot more than that! And then we all fucked but only in a straight way, no homo!

ABOUT THE GUEST COMIC
Sure, whatever, Jay Jurden is funny, but he’s also a delightfully witty and opinionated thinker who can really light up a conversation. He’s a New York-based comedian, writer, and actor originally from Mississippi. Jay recently performed on The Tonight Show With Jimmy Fallon and was featured on Comedy Central Stand-Up. A Stand-Up NBC alum, he was also selected for Just For Laughs festival’s New faces in 2019. Timeout New York named him one of the “Comedians to watch in 2019.” He has been awarded “best LGBTQ comic” by Manhattan Comedy Festival and was the first winner of the Comedy Mob Festival. Jays’ writing credits include Vulture, The New Yorker, and McSweeney’s. He has also been featured on MTV News’ “Need to know.” Film/TV credits include High Maintenance on HBO. He regualarly performs comedy all over New york City. He is currently represented by APA and managed by Seven Summits. His first album will be released very soon.

And, as always, big thanks to Salt N’ Peppa for being the seasoning on this meal. 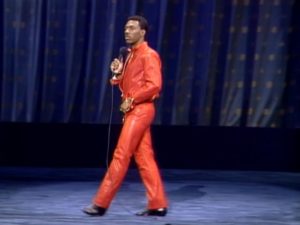