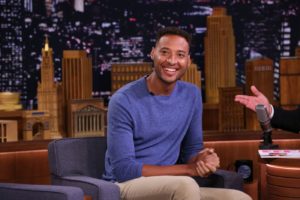 CALLBACKS
The 8’9″ LeClerc Andre crawled in on his hands and knees to get through the doorway to lay down on the ground while he helped us explore CALLBACKS in stand-up comedy. A specialty of his, LeClerc walked us through (crawled us through, really) how he writes callbacks, the effect they have on the crowd, and how much late night shows love callbacks for their short, 5 minute stand-up features. We compare and contrast callbacks with running gags, catchphrases, crowd work callbacks, and more, digging deeply into comedy nerdism. LeClerc also shares his writing process and his perspective on going all the way with comedy. We took notes.

[New feature–check out the chapters in your podcast app!]

ABOUT THE GUEST COMIC
Neither host could successfully say this on the episode, but LeClerc Andre IS having a breakout year. He was a featured New Face at the prestigious Just for Laughs Comedy Festival. He also made his network television debut on The Tonight Show with Jimmy Fallon, and he just appeared on NBC’s Bring The Funny in August. And he’s got a great podcast with LTAS alum, Khalid Rahmaan where they make fun of people’s bad behavior as a way of trying to help us all have better manners. Links below.

Thank you, LeClerc, for an awesome episode. It was really fun to record and educational to edit.

AND A GARGANTUAN THANKS TO THE SHARP-AS-A-TACK AND ALWAYS RELIABLE MONAH AHMED!!! Seriously, Monnaahhh, you’re amazey-ballz. (She helps with research, organization, and communication; she makes the work that goes into this so much better. Anyone else who gets to work with her should count themselves lucky.) Thank you!

And, as always, big thanks to Salt N’ Peppa. I made eggs. Now you’re all that’s missing. Let’s brunch!