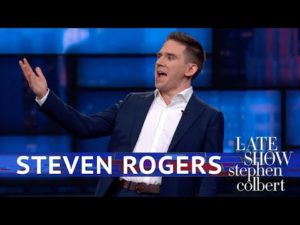 CLEAN (part 2 of 2)
In this second part of our CLEAN comedy interview of the pathologically nice Steven Rogers, we jump right into great material. We listen, laugh, and geek out over it through the lens of everything we explored about clean comedy in part one, so if you haven’t listened to the first installment, do that now. The bits we picked are fantastic–you’ll get some legendary Ray Romano, a taste of the genius Finish comic, Ismo Leikola, and some early hilarity from the brilliant buffoon that is Nate Bargatze. And we listen to Steven’s appearance on the The Late Show with Stephen Colbert! The episode touches on about how clean comedians get creative with curse-substitutes, how clean can be just making the audience fill in the filth themselves, “I know I look like” jokes, clean comedy and irony, logical absurdity, ya know, more things.

[New feature–check out the chapters in your podcast app!]

ABOUT THE GUEST COMIC
Steven Rogers is a “real sweetie pants” of a guy, and I have to say this next thing or else it’ll hurt his feelings: he’s very, very funny, too. His disarming charm is only matched by his humility, which translates into a delightful sense of humor about himself. You can feel the good-heartedness wafting off of him like the pungent scent of New York City street in the summertime. Steven made his national TV debut in 2019 on The Late Show with Stephen Colbert and has been featured in multiple comedy festivals such as Lucy Fest in Jamestown, NY and the Manhattan Comedy Festival where he was named “Funniest Clean Comedian.” He also has a popular anxiety themed podcast with Andrew Schiavone called, “Panic Attacking.” Steven’s comedic ability has established him as a feature act in comedy clubs and also a regular opener for Brian Regan in theaters across the country.

Thank you, Steven, for a damn good time. Yes, we accept Brian’s request to be on the show. We’ll see if we can fit him in sometime.

Special thanks to Ray Romano, Ismo Leikola, and Nate Bargatze.

AND A GARGANTUAN THANKS TO THE SHARP-AS-A-TACK AND ALWAYS RELIABLE MONAH AHMED!!! Seriously, Monnaahhh, you’re amazey-ballz. (She helps with research, organization, and communication; she makes the work that goes into this so much better. Anyone else who gets to work with her should count themselves lucky.) Thank you!

And, as always, big thanks to Salt N’ Peppa. Would you like a pony ride? I bet you like ponies. C’mon…you know you want to.

Oh, and we mention a podcast on “Parapraxis and Elvis” that is rather interesting. Here’s a link: http://revisionisthistory.com/episodes/30-analysis-parapraxis-elvis