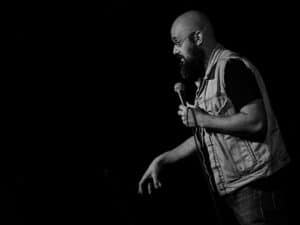 Referencing the articles he’s written on the subject, we talk about the “North Star” of the story, the dreaded “Wonder Years Moment,” and many other aspects of comedic storytelling. What’s the best way to determine when you need an act out? How do you identify what’s wrong with a story that doesn’t hit, and how might you fix it? What’s the real difference between a story and an anecdote? How do you determine what truths to abandon for a good story that still rings true? We bat around these questions and uncover a bucketful of tips along the way via a story by Gastor Almonte, who Simmermon helped prepare for Comedy Central’s “This Is Not Happening,” through some of Simmermon’s own material off his album and from a performance of his at The Moth Grand SLAM.

This Is A Boring Shark Attack: 8 Rules for Fascinating Storytelling
How to Structure a Funny Story
This Ice Cream Will Heal Your Heartbreak: How to Find Your Story’s ‘North Star’
How to Tell a Funny Story That Turns Desire Into Action

ABOUT THE GUEST COMIC
Jeff Simmermon is an accomplished storyteller come stand-up comic. He also teaches comedic storytelling on the side. He’s lived a colorful life, and it shows in his work. From his apparently love of hot pink vinyl to his time spent in a band that featured chickens pecking an instrument, Jeff is a genuine hipster without pretense–he’s earned it as the real deal. His conversation is colorful and sprinkled with metaphors, clearly demonstrating his chutzpah as a writer.  He’s the producer/performer behind ‘And I Am Not Lying,‘ a variety show that combines stand-up, storytelling, burlesque, sideshow and music on the second Friday of every month at UCB East. In 2017, he recorded his first album for Comedy Dynamics. Jeff has won multiple Moth StorySLAMS, including a GrandSLAM in March of 2014. His stories have appeared on This American Life, The Moth’s podcast, and in written form on The Paris Review Daily. HE also teaches a semi-private storytelling class. 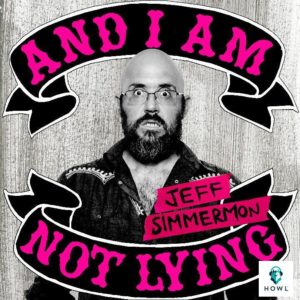 THANKS TO OUR ADMIN AND RESEARCH ASSISTANT: Monnnaaah Singe

And thank you, Jeff Simmermon. We bald, funny guys have to band together.

GUEST PLUGS:
– Jeff is doing a half hour at QED on May 24th, 7:30 PM – https://bit.ly/2TYRTnu
– Jeff’s album, “And I Am Not Lying,” is available wherever you hear digital music and also on hot pink vinyl from Dischord Records: https://bit.ly/2UF0iAI
– If you’re interested in taking one of his storytelling classes, go here: http://jeffsimmermon.com/teaching

Lastly, CHECK OUT OUR SEXY “COMEDY SPEAKEASY” IN MANHATTAN:
https://www.brickspotcomedy.com

And, I’ve finally given in to overwhelming pressure (from 3 comments on the Internet) to truncate the heavily parodied work by Salt ‘N Pepa. But we still love you long time, SnP.

And for the super geeky, here’s some more info on storytelling: http://www.movieoutline.com/articles/the-hero-journey-mythic-structure-of-joseph-campbell-monomyth.html 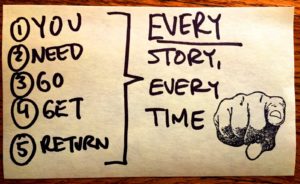