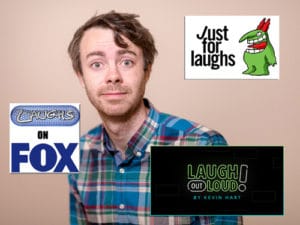 THE SETUP
Undeniably funny, whitely awkward Geoffrey Asmus joins us to explore THE SETUP in stand-up comedy. Like most things in life, the bulk of the work goes into setting things up. If the punchline is the slide, the setup is the stairs to the top. But what is the setup for a joke? Information? Structure? Misdirection? A wink? Any of the above? Is the setup the premise, or is a premise just a part of the setup? We explore these comedy nerd questions along with some setup structures, and we bitch about people getting upset at setups without waiting to hear the whole joke. We also dig into some of Geoffrey’s and Harrison’s material to talk about how they reworked their setups to make their jokes land, and we have a great time listening to and frog-dissecting material from two opposite ends of the stand-up spectrum: Rodney Dangerfield and Ari Shaffir.

ABOUT THE GUEST COMIC
Geoffrey was selected as a ‘New Face’ performer at Just For Laughs Montreal and was featured on FOX’s ‘Laughs’ and Kevin Hart’s LOL Network. He has also performed at the Laughing Skull, Bridgetown, Limestone and Boston comedy festivals and won 3rd place in Atlanta’s 2017 Laughing Skull festival. Geoffrey has opened for Brian Posehn, Aparna Nancherla, Todd Barry, Daniel Sloss and Alonzo Bodden among others. Geoffrey Asmus began performing stand-up in 2013 immediately after wasting $143,548 in college. Within a short time, Geoffrey won Comedy on State’s “Funniest Person in Madison 2015” and Penguin Comedy Club’s “Funniest Person in Iowa 2015,” both times beating out the guy who invented meth, Quentin. 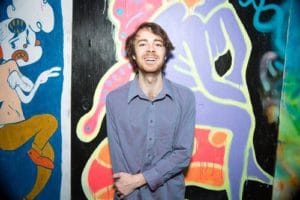 And a huge thanks to to our guest, Geoffrey Asmus!

Special thanks to Rodney Dangerfield’s single premise and Ari Shaffir’s mind-boggling joke structure.
Oh Salt N’ Peppa, our souls shall unite, and you’ll see how much we love thee!

CHECK OUT OUR LIVE COMEDY AT OUR CHIC, RENOVATED PERFORMANCE SPACE:
https://www.brickspotcomedy.com

For this episode, our sometimes editor and executive producer, Bobbi Jeanne Misick, has our heartfelt gratitude. She’s absolutely wonderful to work with–she’s punctual, highly skilled, communicates clearly and with a great sense of humor, and on top of all that, she’s goodhearted gem of a human being and a good comic. Thank you Bobbi Jeanne!
To find out more about this badass, go to https://bobbimisick.squarespace.com/about