skip to Main Content
Menu
Episode 045 COURAGE - Brian Enck: "You have no option but to succeed" 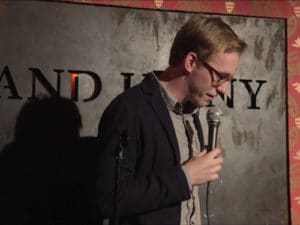 COURAGE
Nationally touring, Brooklyn based comic Brian Enck examines COURAGE in stand-up comedy. Courage is the ability to do what frightens you, so facing fear–fear of failure, fear of non-acceptance, and fear of humiliation–are all central to getting on stage. It takes courage to start, to keep going, and to speak your “truth” or to speak candidly about your flaws, mistakes, or personal weirdness. Yet it’s that vulnerability that can yield some of the most powerfully funny comedy experiences. What are some tricks performers use to get the courage to act despite those fears? Is there a difference between overcoming fear as a performer and failing to do in inside the confines of a bit? What is that bizarre, ironic juxtaposition between the courage it takes to perform and how funny it can be to display a comic’s propensity toward cowardice? We cover this and a lot more via bits by Dave Chappelle, Tig Nataro, Brian Enck, and Jeff McBride.

ABOUT THE GUEST COMIC
Although he looks like a stuffy 1950’s substitute teacher, Brian Enck is a very funny man with lightning wit that’s tempered by self-effacing charm. He’s a working comic who performs around the country and can be seen regularly in most of the major clubs in NYC. Originally from Rochester, NY, and he dropped out of film school for stand-up, and if you’re looking for more bad decisions Brian has made, he used to be Harrison’s roommate! He’s also a producer at Bric TV. 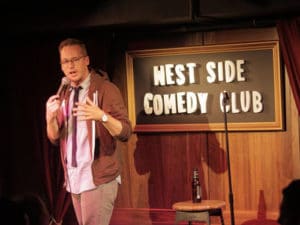 And a huge thanks to to our guest, Brian Enck!

Special thanks to Dave Chappelle’s special mix of fearlessness and courage and Tig Nataro’s unbelievably gentle bravery in the face of pain and grief.

And, as always, we love you long time, Salt N’ Peppa.