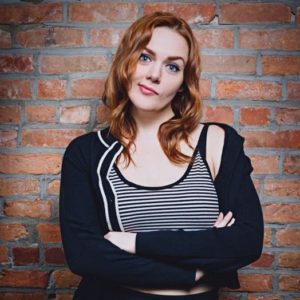 CONFIDENCE
The delightfully confident comedian, Sally Ann Hall, joins us to explore CONFIDENCE as it pertains to the craft of stand-up comedy. What is confidence conceptually? Why is it so critical for a good performance? Where does it come from and how can a stand-up develop it? How do you explain the relationship between portraying yourself as a low-confident person in your material while simultaneously displaying immense confidence as a performer and a writer? We fucking loved recording this!

ABOUT THE GUEST COMIC
Sally Ann Hall goes by Sally Ann, not Sally. She’s vivacious and spicy, a tour de force on stage and an absolute pleasure off of it. She bubbles with funny, energy, and joy. Born in Alaska and raised in Idaho, she is now based in New York and frequently hits the road. She’s got the performance chops of the “very good actor”* that she is. She’s a busy comedy bee, performing at famous NYC clubs such as Broadway Comedy Club, Comic Strip Live, LOL Comedy Club, The Stand, New York Comedy Club, Greenwich Comedy Club, Eastville, and Gotham. She is also the a winner of both the She Devil Comedy Festival and he Laughing Devil Comedy Festival. 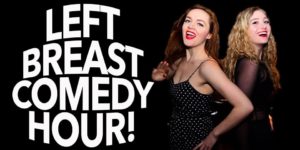 FEATURED BITS ON THIS EPISODE
– Jerry Seinfeld – Confidence (On Comedy With Larry Wild, 2008)
– Sarah Silverman – If You Have To Explain It (Jesus Is Magic, 2005)
– Sally Ann Hall – Circumcision
– Mike Birbiglia – Delusion (Sleepwalk With Me Live, 2011)

And a huge thanks to to our guest, Sally Ann Hall!

And check out her monthly show, “LEFT BREAST COMEDY HOUR!”, which is moving to The Knitting Factory in January:
https://www.facebook.com/leftbreast/

And, as always, big thanks to Salt N’ Peppa. One day, somehow, we’ll join hands and sing our song together with the all-new lyrics we wrote for you in this titular homage/parody we’re so completely sick of.