SELF-DEPRECATION
Jacob Williams (MTV’s Wild ‘N Out, Colbert, America’s Got Talent, & a lot more) KILLED it in this episode! We absolutely could not stay on topic, and so what? This conversation was UNDENIABLY funny! It starts to really pick up steam at about 30 minutes, Jacob has us in literal tears of laughter at the halfway point. Between all the goofing around, we hit every angle we could think of on self-deprecating humor in stand-up. We think Jacob is a grand master of it, and that’s why we chose him for this topic. With respect to the theme, we cover:

– Relating to the comic’s negative traits and experiences
– Comedic license
– Anger and self-esteem
– Being “ok” with the subject of the self-deprecating humor, be it a personality trait or negative experience
– Over-reliance on self-deprecation
– The role of shame
– The effectiveness of juxtaposing self-deprecating jokes with material that targets the same failing in someone or something else 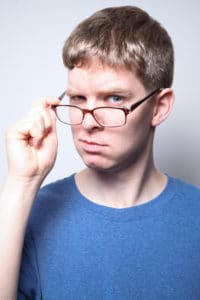 He recently made his late-night network television debut performing stand-up on The Late Show with Stephen Colbert (CBS). Jacob first made his primetime network television debut as a stand-up comedian on America’s Got Talent (NBC) and advanced to the Semifinals. He also performed on the Comedy Central shows Adam Devine’s House Party and Roast Battle. Jacob has been a cast member on the hit improv/sketch comedy series Wild ‘n Out (MTV) for eight seasons including the current one. He has also provided the voice of a cartoon character on the animated miniseries Football U (MTV Other). Jacob lives in New York City where he performs regularly when he is not on tour at comedy clubs, colleges, and corporate events across America.

Thank you, Jacob! We learned so much about dealing with fame and wealth.

CHECK OUT HIS SUPERCUT OF GREAT LINES FROM WILD ‘N OUT WITH 3M+ VIEWS:
– https://youtu.be/oc0mR9v1_yE

IF YOU’RE INTERESTED IN THE STUDY ON SELF-DEPRECATING HUMOR:
– fr. The Daily Mail – https://dailym.ai/2qJT1z4
– fr. The Independent – https://ind.pn/2FdQKWS

AND THE TED TALK WE REFERENCED ON GROWTH MINDSET:
– Carol Dweck – https://www.youtube.com/watch?v=hiiEeMN7vbQ

And, Salt N’ Peppa, come snuggle with us.