WORD ECONOMY
Wordsmith Andy Sandford revs up his writer’s Prius to taut WORD ECONOMY. Levity is brevity, but word economy means more than that. We explore how word economy is not “least words possible,” but rather the least needed for the goal. Is there a connection with word economist comedians and humility? How do you determine what’s necessary and what’s not? Andy also shares insight on his writing process and his writing discipline, which is pretty inspiring, along with some sage comedy advice. We laugh and pick apart some great bits by Jeff Caldwell, Ellen Degeneres, and Steven Wright. Also, Andy was on AQUA TEEN HUNGER FORCE!

ABOUT THE GUEST COMIC
Andy Sandford is a nationally touring comedian who got funny in Atlanta, GA and is now based out of New York City. Andy made his late night debut on CONAN, which was included in The Laugh Button’s “Top 5 Late Night Stand-up Debuts of 2015.“ Andy’s album, Me the Whole Time,” made several “best of” lists, including Splitsider’s “9 Best Standup Specials & Albums of The Year.“ Andy also played an animated version of himself on Adult Swim’s Aqua Teen Hunger Force. Brooklyn Magazine named Andy one of “Brooklyn’s Funniest People,” and the Village Voice called him “one of New York’s comedic gems.” He’s a humble guy with a brilliant wit, and we were glad to have him on the show! 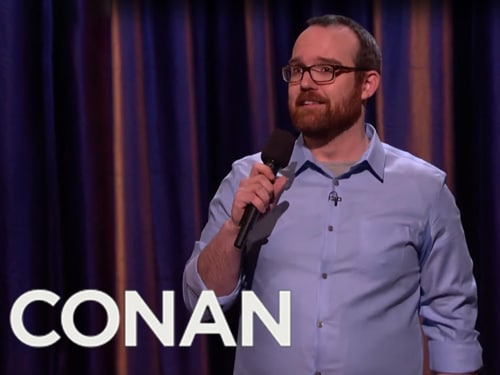 Thank you, Andy! I need say no more.

ANDY HAS A NEW ALBUM
It’s dropping on July 27th, 2018, from Comedy Dynamics, called, “Shameful Information.” You can read more about that here:
http://www.comedydynamics.com/andy-sandford-shameful-information

HIS ALBUM:
“Me The Whole Time” – https://open.spotify.com/album/4aimV6ybDJOTi0Epty847q

GO SEE HIS WEEKLY SHOW:
Permission To Fail: every Monday at the Creek & the Cave (10pm) where very funny, top level NYC comics go to try out their new bits.

Special thanks to Jeff Caldwell, Ellen Degeneres, and Steven Wright.

And, Salt N’ Peppa, we love you for all this fair use, you’d love us. Come snuggle!

SUPPORT “Let’s Talk About Sets!”:
Please like us on Facebook and, if you’re feeling grateful, consider sponsoring us on Patreon.
http://www.patreon.com/letstalkaboutsets