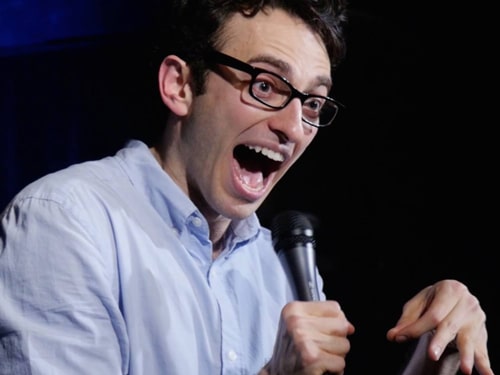 ANGER
The multi-talented, very funny and passionately neurotic Gianmarco Soresi explores ANGER in stand-up. All three half-Jewish white fellas share temper problems and a love of comedians who use anger to get to the funny. We talk tantrums, yelling, when anger goes wrong, and why impotent rage is so damn funny. How do you make things ok so people can laugh while you’re expressing genuine anger? What elements soften anger, taking the fangs out so people don’t feel threatened while a comedian is screaming at them? We laugh and analyze through bits by four VERY different comedic anger styles: Bill Burr, Sam Kinison, John Mulaney, and Mary Mack. All this and a lot more in this very funny, engaging episode.

ABOUT THE GUEST COMIC
Gianmarco Soresi is a comic, actor, and playwright; but the first line of his obituary will likely read “guy from all those General Electric commercials.” He’s such a great guy and an engaging entertainer! He recently headlined Carolines on Broadway as part of their Breakout Artist Comedy Series, featured at Hu Ke Lau and the del Lago Casino, can be seen on SeeSo’s New York’s Funniest. He regularly performs at UCB, Stand Up NY, EastVille Comedy Club, The Grisly Pear, The PIT, Comix Mohegan Sun and more. As an actor he can be seen on Tracy Morgan’s The Last OG, CBS’ Blue Bloods, TruTV’s Hack My Life, Comedy Central, is a member of the sketch team Uncle Function, and his play, Less Than 50%, will receive an Off-Broadway run this July at 59 East 59.

And a huge thanks to our guest, Gianmarco Soresi!

CHECK OUT HIS LIVE SHOWS IN NYC: https://thepit-nyc.com/events/
– His weekly show The Last Laugh Sunday’s 8PM at The PIT Underground (amazing line-ups!)
– His new weekly SNUG! Fridays 10PM in the PIT Attic
– The High Note, his one-off show at the new Brooklyn House of Comedy May 11th, 2018 at 8PM

AND HIS WEBSERIES: Matza Pizza
https://goo.gl/XiL1K2

And, as always, we parody so hard on Salt N’ Peppa with our punny fair use, and we love them for keeping their lawyers chained to their mahogany desks.