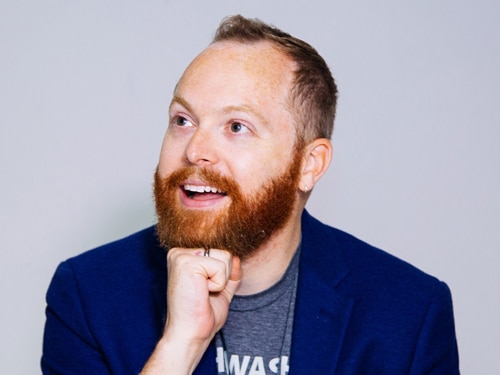 TABOO (pt. 1 OF 2)
The absurdly dark Tristan Smith wades with us into the nasty, deep end of the comedy pool: TABOO. It’s a two-parter. For this episode, since we’re talking things “forbidden by society,” I’d recommend gently plugging your tender ears with a double-ended dildo. This is one part craft and comedy theory and one part societal debate, all marinated in total fuckery. We dive right in with some David Cross, followed by the great “Kramer Meltdown,” Dave Chappelle’s response to it, and then George Carlin’s seminal bit from the 90’s about taboo words and their context. And we argue the bejeezus out of it all.

RECORDING NOTE: We’re all good friends, but working with Tristan and Harrison at the same time was personal goddamned nightmare, which I say with genuine love. Ironically, I, myself, had my post-therapy-version of a meltdown the first time we tried to record. They messed with me so much that we ran out of time to record. Yet, the results are hilarious. I was laughing really hard while editing this pile of filth.

ABOUT THE GUEST COMIC
Tristan Smith is one of a handful of people who consistently renders me non-responsive with giggles. He’s got 7 years of improv experience on top of his stand-up tenure, and it shows. He’s a fearless stand-up MC and former member of the Reckless Theater house team “Big Fiasco.” Tristan can frequently be seen at Broadway Comedy Club in Manhattan, and he was formerly an active host and co-producer with Laughing Buddha Comedy. As of 2018, he runs a weekly open mic with Patrick Holbert that’s related to their podcast, “The Comic’s Table.”

And a huge thanks to our guest, Tristan Smith!

Listen to his popular podcast, “The Comic’s Table,” which he co-hosts with fellow comic, Patrick Holbert:
https://www.comicstable.com

And, as always, super-duper-mega thanks and love to Salt N’ Peppa. Our use is tough but fair.