skip to Main Content
Menu
Episode 022 REINTERPRETATION - Brett Druck: "I just realized how hard it is to please a human" 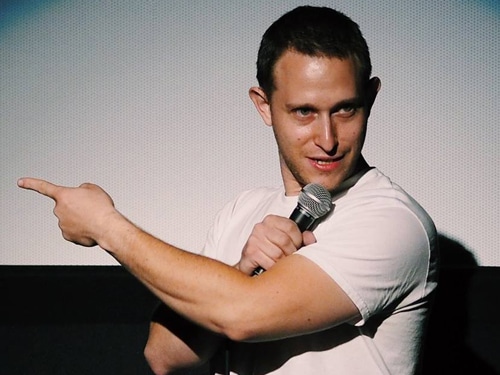 REINTERPRETATION
The effusively funny Brett Druck jokes his way through a must-hear episode on REINTERPRETATION, or “flipping perception.” It is his favorite element of stand-up. I’m proud to say that this is among our top three favorite episodes to record (and edit!). We cover clichés, perceptual shifting, and how reinterpretation bits stick with you. And ironically, because they are so memorable, the most effective reinterpretation jokes are harder to laugh at later. And there’s so much more. From Brett’s best mentor tip to his incredible advice on social media mastery, this episode is jam-packed with applicable knowledge, leaping from one laugh to the next like an actual stand-up set. We cannot recommend this one highly enough! He even made me laugh from the very moment I started trying to book him. The infographic included on the webpage (check it!) will make hilarious sense once you hear me introduce him.

ABOUT THE GUEST COMEDIAN
Brett Druck is stand up comic and cast member on Laughs TV Show seasons 2 & 3. He’s been on America’s Got Talent, on HULU, Pandora Comedy Radio, and he’s been mentioned in Rolling Stone. He frequently appears on the front page of Reddit and has had his jokes shared millions of times online. He’s a nationally touring comedian and he’s been in all kinds of comedy festivals including TBS’s Just for Laughs Chicago, The Charleston Comedy Festival, he was a finalist for The Andy Kaufman Award. Most recently he appeared on NBC SeeSo’s “SCHTICK OR TREAT: HALLOWEEN STAND UP SPECIAL” as part of their first annual ‘Stand-Up Streaming Fest’. Brett’s a badass.

CHECK OUT HIS WEBSITE FOR TOUR DATES AND BOOKING:
http://www.brettdruck.com

And, as always, for Salt-N-Pepa, our entire show is an homage to you and to the legal concept of fair use.