skip to Main Content
Menu
Episode 018 THAT'S A BIT - Sam Evans: "It feels like you're stumbling into it" 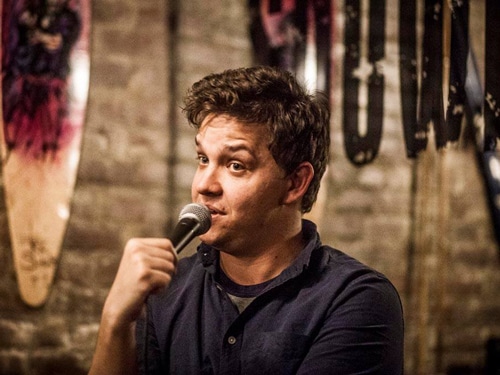 THAT’S A BIT
Delightfully insightful comedian, Sam Evans, explores “THAT’S A BIT,” the often maddening process of recognizing what’s funny and then turning it into functional comedy. We explore the stages of development through which comedy material can take shape, and we speculate on how some varied, fantastically funny comedy bits may have been created. There’s great stuff here about not chickening out on an idea, when to maybe give up on one, and the importance of collaboration. It’s a craft-heavy episode that’s funny as fuck. And let’s be honest. When it comes to funny, fuck is “up there.”

ABOUT THE GUEST COMEDIAN
Sam Evans is an NYC comedian who’s originally from Cincinnati. He was in “Just For Laughs” comedy festival in 2014, featured in “New Faces,” which is a rather big deal in comedy circles. Aside from his regular stand-up appearances all over New York, Sam has a podcast, adultly titled “Up Your Butt And Around The Corner. ” A regular at the Creek and the Cave, Sam is a comedic presence for whom other comics look up from their notebooks when he’s on stage. He’s also a producer of the long-running, weekly, live comedy show, “Tyrannosaurus.” 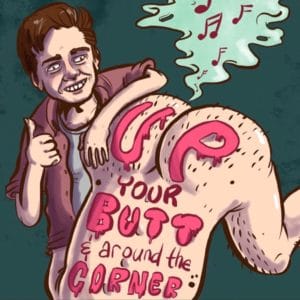 And, as always, for Salt-N-Pepa, our attitude is gratitude for the fair-pun-use of their song.