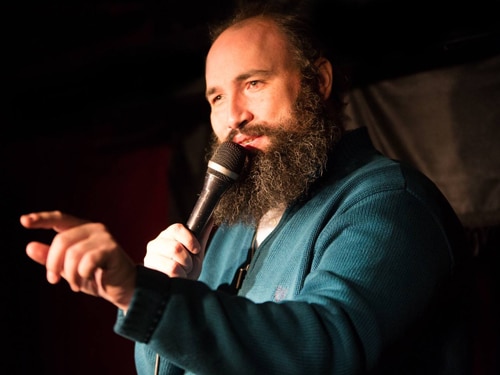 HONEST SADNESS
Genius joke writer, Jay Welch, plumbs the depths of the exquisite laughter born of HONEST SADNESS. What, in a stand-up performance, makes the difference between an onstage meltdown that makes everyone cringe and a deep truth that induces a tear-in-your-eye involuntary laughter spasm? Are some rhetorical and writing devices better suited for this kind of humor than others? We explore these ideas in a sometimes funny, sometimes somber, but always interesting episode with some amazingly, touchingly funny stand-up material that deals with envy, addiction, and death. Funny stuff, right? (Oh, and by the way, I really did take notes when I was editing. This is chock-full of great stand-up craft stuff.)

ABOUT THE GUEST COMIC
Jay Welch is stand-up comedian and comedy writer. He’s a contributor to the popular website SomeEcards, and his comedy writing has also been published by McSweeney’s, Slate, uInterview, and BustedTees. He performs in the top comedy clubs all over New York City, and he is a recurring performer at The Stand’s popular RoastMasters show, where he is ranked in the top 25. His roast battles have gotten over 25,000 views on YouTube! In addition to his work at clubs, Jay also performs at alternative comedy venues around New York, where, in addition to leaving audiences gasping between laughs, he is a definite favorite among his fellow comics.

And a huge thanks to to our guest, Jay Welch, for donating his wit, wisdom, and time to the show.

Special thanks to Karen Kilgariff, Doug Stanhope, and Mike Birbiglia for being so good at what they do and so unaware of how much we rely on it to do this show.

And, as always, Salt-N-Pepa. Nothin’ but love here. Love, and very, very fair use of their utterly altered song. Also, thanks for being so gracious about how I have been mispelling your name for months.