skip to Main Content
Menu
Episode 008 WORD CHOICE - Casey James Salengo: “Every day it’s like I never learned anything before”

WORD CHOICE
Casey James Salengo is a New York stand up comic, writer, and actor. He’s a lovably funny guy who likes things simple and hilariously acknowledges his refusal to learn from his life experience. He is the very essence is laissez-faire, and it really works for him. He’s a master of carefully selecting the right words to compliment his theatrical comedy style, and some very good things have come his way recently. So this episode explores two themes: “word choice” in material and “opportunities” in show business.

ABOUT THE GUEST COMIC
He’s been in Just For Laughs, a new face in their New Faces. He was also a featured comedian in the Bridgetown, Brooklyn, and Red Clay comedy festivals. He’s just finished recording his Comedy Central Presents Half Hour special AND you’ll be able to see him sometime in the next few weeks on Jimmy Kimmel Live! His first album is being recorded at the Creek and the Cave right here in New York City on June 30th.

He also has a podcast, called “The Good, the Dad, and the Ugly.” It’s about three ignorant guys who bring women on to domesticate and sophisticate and the men out of their wayward ways.

FEATURED BITS IN THIS EPISODE 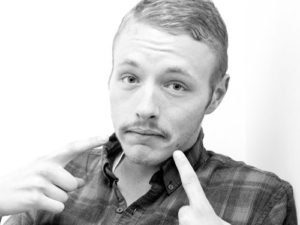 And a huge thanks to to our guest, Casey James Salengo. He’s recording his album at The Creek and The Cave on June 30th.

Special thanks to Norm MacDonald and Brian Regan. And, as always, big thanks to Salt N’ Peppa for not suing us for not yet suing us for fairly using portion of their song so modified that it is almost unrecognizably different from the original.

And lastly, do follow Casey! He’s a royal treat, and you deserve a treat, your Highness. He is

And a very, very special thanks to Dr. Benjamin Cerf, who uses his Doctorate of Economics to convince his best friend which parts of this podcast will lower consumer demand.


Tweet
Copyright Jeffcorp Enterprises: A Jeff Company, subsidiary of Jefficom, part of the Jeffbrands family. All Jeff rights reserved by Jeff and for Jeff. Please direct all questions to Harrison.
Back To Top
×Close search
Search
×