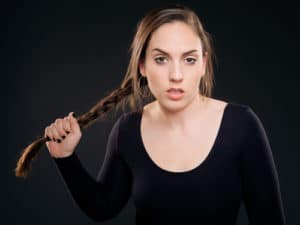 Caitlin Peluffo is a machine gun of audience-loving funny, a “lovable loose cannon.” She’s a Wonder Woman at working with audience energy, so this episode is dedicated to “ENERGY.” Comics talk endlessly about energy, whether or not they’re New Age crystal masters. What do they mean by it? How do you manage it? How do you read it? And since Caitlin is so funny and endearing, the three comedians laughed and joked their way through this entire recording. As a result, you’re going to love it.

Caitlin is quick-witted, disarming comedian based in Brooklyn whose sense of humor about herself is downright infectious. So it’s not surprising that she’s done so well at many comedy festivals and competitions around the country. Peluffo has also been seen on NBC’s Seeso in “New York’s Funniest” and performed with Gilbert Gottfried, Gary Gulman, and the late Kevin Meany. Although she focuses on her love of “dating” and her lack of self control, no subject is off limits. And she just had her callback for the Just for Laughs Festival here in New York! 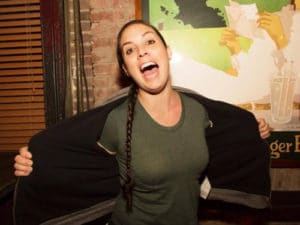 Oh, and special thanks to Dave Attell, Rory Scoville, (as always) Salt ‘N Peppa for all of our remarkably fair use.